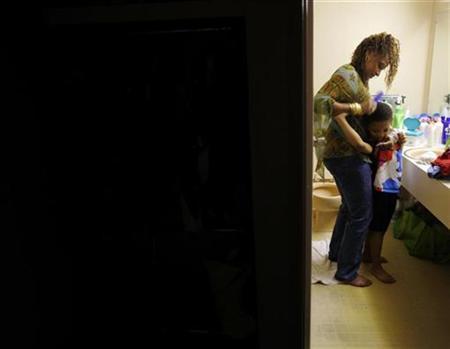 You may have heard the oft-quoted statistic that autism affects 1 in 150 US children. Turns out it’s more like 1 in 91 — and about 1 in 58 boys, according to new figures released Sunday.

That’s an estimated 673,000 US children — or approximately 1 percent of all U.S. kids, the researchers from the U.S. Centers for Disease Control and Prevention, Atlanta, and Harvard Medical School, Boston report in the journal Pediatrics.

Bob Wright, co-founder of the autism advocacy group Autism Speaks, told Reuters Health he’s not at all surprised by the new figures. “We’ve been screaming about the numbers going up; now there is a relatively complete recognition of it.”

“The statistical aspect of autism is just staggering,” he said, and not enough is being done about it. “If we had 1 in 58 boys getting swine flu, the country would be crazy,” Wright said.

Autism is a brain disorder characterized by problems with social interaction, repetitive behavior and other symptoms. People with a mild version called Asperger’s syndrome usually function relatively well in society, although they have problems relating to others. People with the most extreme symptoms may be unable to speak and may also suffer severe mental illness and retardation.

No one knows what causes autism — it’s generally thought to have genetic and environmental triggers — and there is currently no good treatment.

Autism is “an urgent public health concern,” Dr. Ileana Arias, deputy director of CDC, told reporters on a conference call Friday ahead of public release of the data.

Despite earlier health agency warnings, there is no strong evidence that the anti-smoking drug Chantix raises the risk of suicidal thoughts or depression compared to other stop-smoking products, researchers reported Thursday in the British Medical Journal.

Back in July of this year, U.S. health officials ordered strong “black box” warnings be added to Chantix (also called varenicline) as well as anti-smoking drug Zyban, following more than five thousand reports of depression, hostility and other behavioral changes possibly associated with use of these drugs.

“There have been recent concerns that varenicline, a relatively new smoking cessation product, may increase the risk of suicidal behavior and suicide,” study co-author Dr. David Gunnell of the University of Bristol, UK, explained in an email to Reuters Health.

“We found no clear evidence of an increased risk of self-harm or depression associated with varenicline,” he said.

The findings stem from data on more than 80,660 would-be quitters in the UK who used different smoking cessation products between September 2006 and May 2008.

A total of 63,265 of these individuals used nicotine replacement products, 10,973 used Chantix, and 6,422 used Zyban, an antidepressant also called bupropion, which has been found to help smokers quit.

When researchers looked at medical records, they didn’t find any evidence of an increased risk of serious mental health problems (i.e., self-harm, suicidal thoughts or depression) while they were using these products and during the three months after the last prescription was filled.

Gunnell cautioned, however, that based on the size of the study, it’s still possible that Chantix does increase the risk of suicide – or even decrease it.

“Other studies should be undertaken to provide further evidence on this issue,” he concluded.

This video goes over a wellness approach to addressing mental health issues like depression, anxiety, ADHD, bipolar or even schizophrenia. Is it possible to address these types of problem without psychoactive medications? This video provides as alternative health approach.
Dr. Vincent Bellonzi is a chiropractor and is certified in Clinical Nutrition. He has been in practice for over 12 years. He received his Doctorate from Los Angeles College of Chiropractic in 1991.

Since 1998, Dr. Bellonzi has practiced in the Austin area. He works with athletes at every level to provide sports conditioning and rehabilitation.